In Corfu, the locals call him Agios, “The Saint”. Everyone knows that “The Saint” of the island is Saint Spyridon. Saint Spyridon may never have lived in Corfu, but after the fall of Constantinople in 1453 his body was transferred for safety to Venetian-occupied Corfu, where the remains of the Saint is still found today. In Corfu he was loved more than any other Saint.

He celebrates on December 12 in a majestic celebration that celebrates the whole island of Corfu. It is no coincidence that the names Spiros and Spiridoula are given to almost half of the inhabitants of the island! But Saint Spyridon is honored by the people of Corfu three more times every year! Each holiday is athanksgivingfrom the locals for each one of its miracles. 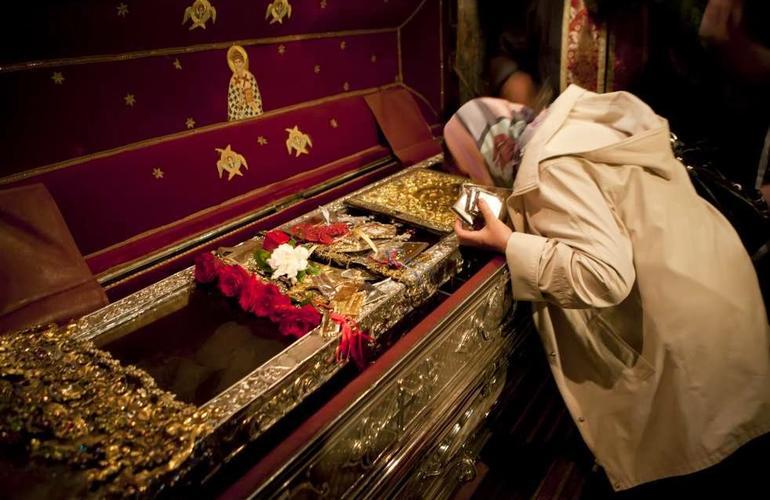 The first miracle is celebrated on Palm Sunday, two weeks before the Orthodox Easter. The litany of that day, which is one of the largest litanies of the year, takes place in the memory of the miracle of Saint Spyridon who saved the inhabitants of the island from the plague in 1629.

The second litany of Saint Spyridon takes place on the first Sunday of November. The island celebrates the intervention of the Saint for the second protection of its inhabitants from the plague in the year 1673.

The rescue of Corfu from the Turkish threat during July – August 1716, proves the effectiveness of the warm faith of the Christians of the island, but also the constant presence of the Saint of Corfu. This procession takes place in the summer on the 11th of August. The story goes that during the siege of the Turks on the island a terrible storm broke out that forced the Turks to flee. The departure of the Turks, on August 11, was so sudden, and was attributed to the miraculous intervention of St. Spyridon. It is noteworthy that this siege, for the first time, did not cost the life of any Corfiot of the civilian population.

The church of Agios Spyridon in the most central part of the city, although in the city narrow streets of the city (called Kantounia) stands out, since it has the tallest bell tower. It was built in 1859 by the Voulgaris family. Externally it is very simple but its interior will enchant you! It is worth paying special attention to the roof of the temple which is divided into 17 sections with a gold frame. Among the many candelabras and tributes that you will see in the temple, there are 2 large candelabras dedicated in 1716 by the inhabitants of the island for the miracle of the saint in 1716 who saved the island from the Turkish siege.

The remains of the Saint Spyridon  kept at a special crypt where you have the opportunity every day 12:00  to see and worship the Saint . The pilgrimage receives thousands of pilgrims every year and the Sirioti travel agency is close to them every moment of their stay on the island.

Follow ilovecorfu on the web at ilovecorfu.grbut also on social media on facebookand instagramand stay close to your favorite island!

All the above information is a suggestion of the ilovecorfuteam with the main and unique guide to help the visitors of our island to enjoy our place better. Do not hesitate to contact us to share your experience or suggestion! It will be our pleasure to hear from you!